Hey kdong, thought I would cite this great post of yours to add some statistical data to the mix.

Taking measurements of erect girth from multiple studies, a sample of males ( n= 381) was used to develop an accurate mean and standard deviation for Erect Girth.

What does this mean?

Here’s the girth chart from the Lifestyles condom study to show how that looks on a chart: 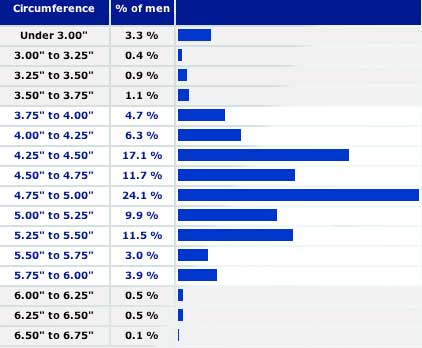 I can wear a Magnum without any slippage and my girth sucks. 5 and a quarter girth here.

Im less than 5 1/4 and I get no slippage with a magnum.. they are far more comfortable and I can roll it back to cover my length.. Not many men need a magnum but some wear them for comfort and others just to show off

Magnums shouldn’t really be called Magnums in my opinion, I’ve never tried them since I don’t live in the US, but the measurements are smaller than the “Grande” condoms we have where I live, and those were tight even before I started PE.

Thank god for Mysize and Theyfit. Pasante Unique are also pretty nice but I wish they made them a tiny bit bigger.

Thanks for the reply. - And wow that is an amazing stat. Shows how much we DON’T know about such a subject, or the world at all. I wonder why girth is more important, how it feels etc. compared to length.

I have reached my goal. At least for now.

Well this is has been a rather magical “educational experience”. To quickly quote from - http://www.thed atereport.com/d … magnum-condoms/ interesting observation to throw into the mix.

I think its reasonably fair to say the Magnum XL condom measurements briefly mentioned at “2.48 inches wide at the head” is a significant size and would likely remain a consistent width measurement for the rest of the length of the condom.

I have also asked female friends and previous ex girlfriends about which is considered most important and girth 9/10 always seems to come out on top. Although I’ve read numerous post’s about the positive feedback of PE has had their Marriage, relationship, DTF friends and whatever other cool acronyms social media has given birth to for referring to having sex; but for myself sadly I have never had positive feedback with an almost defensive response every time ” You definitely don’t need to be doing any PE stuff what so ever”

I don’t have any earth shattering measurements either so.. What gives? Any feedback would be appreciated.

A bit off topic but because I’m new to the forums with limited area’s to post I will throw out a tid bit to the Matrix and say I just bought a Vacu-tech Pulsar electric pump with a Elliptical cylinder—->The outrageously expensive one no one is willing to buy and test out.. Yes I am a risky guinea pig willing to give it a shot with a positive can do attitude; let me know if any of you are sharing the same experience, cheers!

I completely agree; an accurate 7” is massive and if I ever get close to this I would likely start comparing myself like a side by side motorcycle to random objects like the large size red bull cans, shaving foam bottles and an Evian bottled water .the last one is weird not sure where that came from maybe because they offer it in glass haha.

The largest girth I’ve ever achieved directly after using the x40 is 6.4-6.5 and it felt and looked massive - Like a 10lb dumbbell swinging between my legs. Obviously fluid build up which isn’t great but yes I don’t think I will ever have to buy a larger water based pump again specifically for girth anyways.

This topic has been covered numerous times. For the record, it’s also been covered that women don’t really care about penis size. Most women want an average size cock. On the other hand, there has been talk that women seek big ones for one night stands.

What would make it more interesting would be to find out what men want in a cock. That would be a thread we haven’t beaten into the ground. I find it quite amusing that these types of threads pop up and they are always about the women. I understand that this is a predominantly straight man site but the gay guys always get discounted.

I don’t know if the gay population gets discounted or they just have not asked. A straight guy may not be interested enough to ask but that does not mean they don’t appreciate a gay guys right to ask. If you want that info start a poll or a new post. You may just be surprised and get the info you are looking for.

That should be interesting.

I have reached my goal. At least for now.